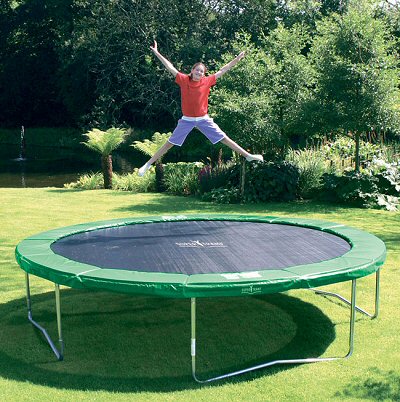 Trampolines are an object of affection for kids. However, they are also commonly used in sports and recreational contexts where gymnasts require a trampoline to facilitate higher jumps. People can even buy trampolines for use in their homes. While it is simple to buy a trampoline, there are potential issues. Those issues often involve safety issues. The big question is, does Florida home insurance cover trampolines?

Trampolines characteristically feature a tight, stretched taut over a steel frame featuring several coiled springs. In addition, they can launch people in the air when they jump onto them. They can jump higher due to the fabric mat that stretches over the frame. While it is not entirely elastic, the coiled springs’ responsibility produces the elasticity causing the bouncy effect. Meaning the springs store potential energy and release it when they jump.

The problem with trampolines

Trampolines can be a fun addition to the home. However, they have a side many people do not quite understand until someone gets hurt. If not tended to properly, a trampoline can hurt someone. Furthermore, when we say ‘tended to,’ we mainly talk about watching over the people who use the trampoline. The negative thing about trampolines is that they are significant liabilities. Even if they watch the people who use a trampoline, there is still a risk of becoming critically injured. Neck and back injuries are the main issues with a trampoline at home.

That is another reason parents should not leave kids alone on a trampoline. Parents can do everything to ensure kids’ trampoline is high quality and safe enough to use. However, the risk of injury is still there. In addition, an accident injuring someone else’s kids is possible. As a result, that could open up a new can of worms. The innate potential of risk is why many home insurance companies do not cover trampolines.

The cost of trampolines and homeowners insurance

Yes, they would be hard-pressed to find Florida homeowners insurance for trampolines. Even if they call a local Florida home insurance company, they may get a conflicting answer. Some people get an immediate response that points to no in all respects. So, what should they do if they have a trampoline in the Floridian home?

Although it was just a few years ago, the U.S. Consumer Product Safety Commission reported that hospital emergency rooms treated over 80,000 injuries associated with trampolines. Furthermore, many health organizations have published warnings about the likelihood of suffering injuries when using a trampoline. Information like those mentioned above supports homeowner insurance companies and their decision not to insure trampolines.

How bad could trampoline homeowners insurance be?

However, how much risk can a trampoline pose to a home insurance policy? For example, many homeowners insurance policies have a ‘trampoline exclusion clause.’ That means the homeowners’ insurance company will not cover liability expenses if those injuries are related to trampolines.

So, they have not seen any Florida homeowners insurance for trampolines. They are just too risky to insure. On the other hand, though, they might still consider getting that trampoline. So, if customers get that trampoline, is there something Florida Insurance Quotes can do to protect them? They might be surprised at what we can do.

Florida Insurance Quotes might ensure a trampoline under the homeowners’ insurance policy or even a different policy altogether. Nevertheless, they will have to face many restrictions that may discourage them from the concept.

Some insurance companies offer the option to insure a trampoline if they take safety precautions first. That usually involves installing a safety net around the trampoline perimeter. As a result, it helps prevent those who use the trampoline from falling off. In addition, homeowners must secure the trampoline with a lock if they get a net installed. A lock will prevent unauthorized people from jumping on the trampoline without permission.

The insurance carrier may also advise them to anchor the trampoline. As a result, anchors provide it with some much-needed stability. In addition, it may help prevent the trampoline from going airborne during a storm. But unfortunately, hurricanes are something that occurs far too often in Florida.

Even if they manage to do this, the insurance company may charge an additional fee. However, that applies to homeowners insurance companies that insure trampolines in the first place.